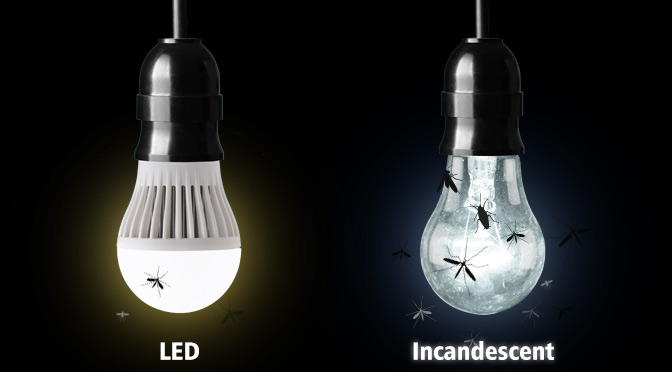 You’ve seen it time and time again—hundreds of bugs buzzing around an outdoor light. There’s no question that light sources attract bugs, but what exactly is it about light that draws them in? More importantly, can anything be done to fix this? Although no amount of spray, citronella, or bug zappers will ever completely eliminate bugs, there are ways to attract less of them. LED lights serve as one way to dramatically reduce bug presence. That’s right, when compared to other light sources, LEDs will reduce the presence of bugs; they will not transform an outdoor area into a bug-free zone.

There have been many studies done about the correlation between lighting and bug presence. In a research paper titled Insect Vision: Ultraviolet, Color, and LED Light, Marianne Shockley Cruz and Rebecca Lindner, from the University of Georgia’s Department of Entomology write, “Experimental work supports the idea that color perception exists in insects and that they are especially responsive to the shorter wavelengths of the visible spectrum and UV light.” Wavelengths are measured in nanometers, and shorter wavelengths of light (less than 550 nanometers) can indicate ultraviolet (UV), blue, or green colors. Cruz and Lindner also cite work that confirms the correlation between UV light from the sun and moon and how certain bugs navigate Earth. Another point to remember about bugs is that certain types, such as mosquitoes, are attracted to heat and have thermal receptors to help them find it. All of this information is helpful for determining why bugs flock to certain light sources.

The color that’s emitted from a light source is important because of its ability to attract bugs. As previously stated, shorter wavelengths (UV, blue, and green light) are more visible to bugs than longer wavelengths (yellow, orange, and red light) and, therefore, will attract them. Incandescent, compact fluorescent (CFL), halogen, and high-intensity discharge (HID) lights emit UV radiation that is attractive to bugs, and since certain types of bugs navigate by UV light from the sun and moon, a closer, brighter source of UV light can disrupt their orientation and draw them in. LEDs produce very little to no UV light, which makes them less visible to bugs. However, it is still possible for an LED bulb to produce shorter wavelengths of light (bluish white/cool white color), which will be more attractive to bugs. Therefore, when browsing for bug-resistant LED lights, it’s important to choose a bulb or fixture that emits more wavelengths that are above 550 nanometers, such as warm white, ultra warm white, or yellow lights. 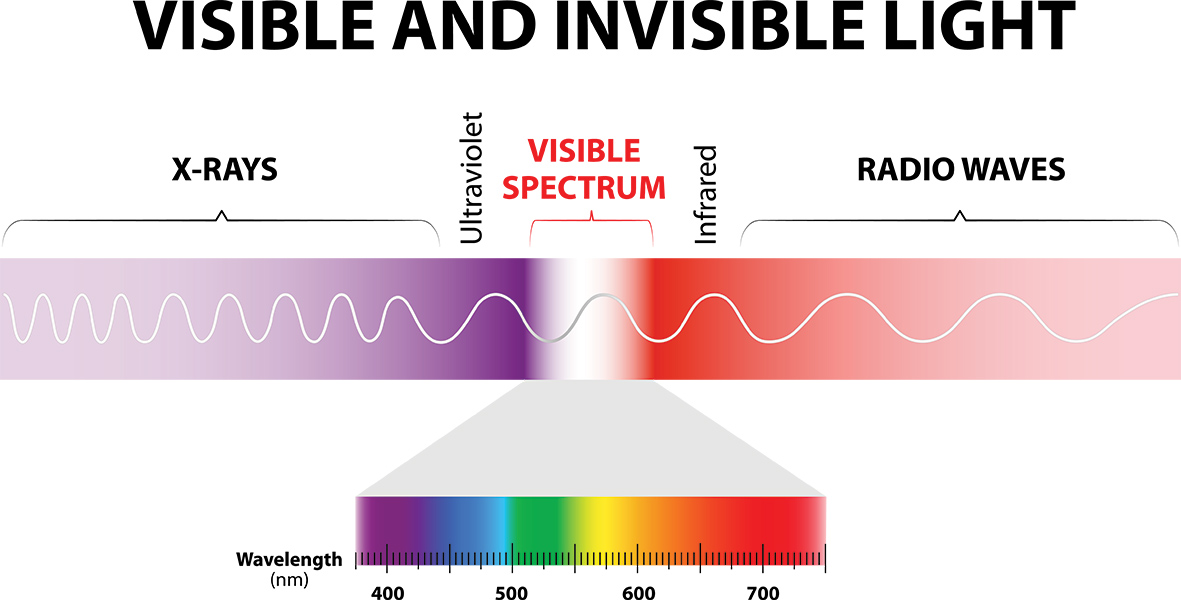 If an LED bulb lists a correlated color temperature (CCT) instead of nanometers, it’s easy to tell if the bulb will be more or less visible to bugs. CCT is measured in Kelvin (K), and different temperatures on the Kelvin scale represent different colors. An LED bulb with a CCT below 3600K will emit warm or ultra warm white light that’s not easily seen by bugs. Bulbs with CCTs of 3600K and above will emit natural or cool white light that is more likely to attract bugs.

Incandescent, halogen, CFL, and HID bulbs waste most of the energy they consume—as much as 90 percent—in the form of heat. Bugs with thermal receptors can sense the heat released by these light sources. LED bulbs produce a minuscule amount of heat, which makes them less appealing to bugs.

LED bug lights are simply light bulbs with a yellow coating that decreases the color temperature of emitted light. Because of the coating, bulbs will emit a peak wavelength of light that is around 550-600 nanometers. However, yellow-coated bulbs aren’t the only lights that can reduce the presence of bugs. LED lights that emit warm-colored illumination, such as yellow strip lights, yellow malibu light bulbs for landscape applications, or gold-tint filament bulbs, are great for creating an area that is less likely to attract bugs.

Ecologist Michael Justice performed an experiment to determine the type of residential light that attracts the least amount of bugs. He used six lighting types inside of an insect trap each night during the summer. Justice also made efforts to equalize the effects of weather and the moon’s irradiance. His findings were presented at the 2016 American Association for the Advancement of Science (AAAS) conference. Justice wrote, “The incandescent bulb had the highest capture rate, followed by CFL, halogen, LED with a cool color temperature, and the “bug” light. An LED with a warm color temperature had the lowest capture rate.” To sum up his findings, Justice added, “From an ecological perspective, LEDs with a warm color temperature should be favored because they attract the fewest insects, their lower emission in the blue spectrum should reduce their contribution to light pollution, their directional technology allows for more precise lighting, and they have favorable energy conversions and life cycle assessments.”

It’s been established that LED lights of warmer color temperatures will attract less bugs, but there are LED options available that are actually designed to draw in bugs—and kill them! The LED Z-Bug Bulb™ from NEBO is a bug zapper and an LED bulb in one. The bulb emits white illumination from its top and ultraviolet (UV) light from its caged center. The UV light attracts mosquitoes and other insects toward the bulb’s high-voltage electric grid and kills them on contact. 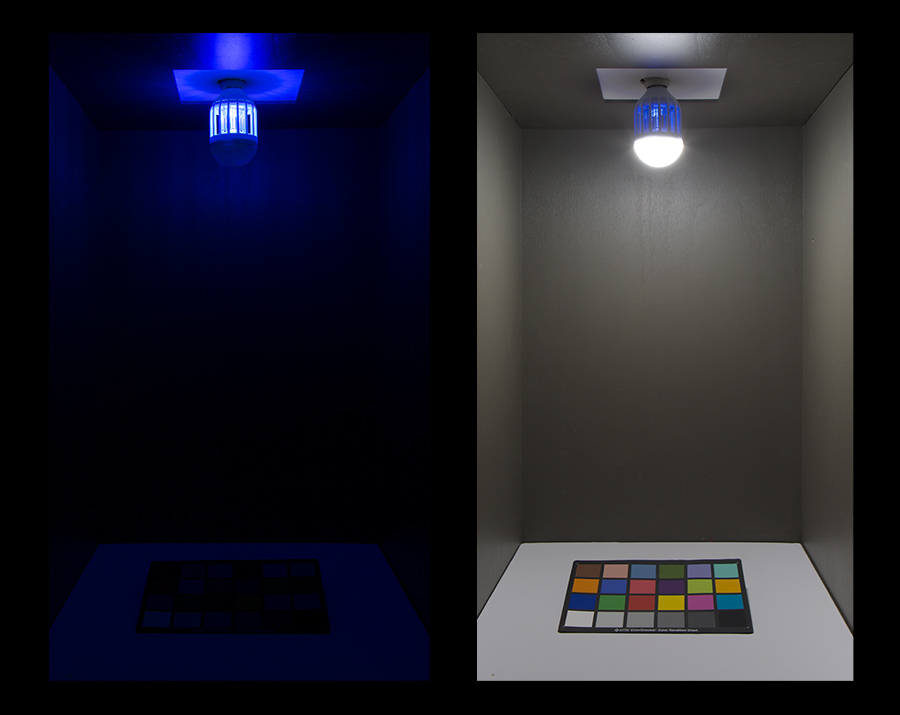 Samantha is a copywriter/blogger at Super Bright LEDs, Inc. She graduated from the University of Missouri with a bachelor’s in journalism and currently lives in St. Louis with her husband. When she’s not immersing herself in all things LED, she’s zumba-ing or playing with her two little troublemakers (chihuahuas)!

The surname Flores has existed in Spain since the 12th century, but a common origin has not been found. It...

When you dissolve table salt (sodium chloride, also known as NaCl) in water, are you producing a chemical change or...

The Legal Drinking Age in Canada

The legal drinking age in Canada is the minimum age at which a person is allowed to buy and drink...

How Is Gold Formed? Origins and Process

Gold is a chemical element easily recognized by its yellow metallic color. It is valuable because of its rarity, resistance...

How to Choose LED Drivers and LED Power Supplies

Do Sharks Ever Sleep, and How?

How to Get a GRE Voucher and Discounts on the Test

Geology and Wildlife of the Appalachian Mountains